As always, I’ll preface this segment by saying these are the best I personally remember as I type this column. I might be forgetting the obvious. Also, I’m too young to remember the Dolphins back-to-back wins and remember only part of the Steeler dynasty — SBs 13 and 14.

That said, I have watched 39 Super Bowls, starting with Super Bowl 11. My most vivid memory of that game was Raider defensive backs Jack Tatum and Skip Thomas hitting Vikings receiver Sammy White so hard that White’s helmet flew 10 yards downfield. Most impressive was that White held on to the ball. I don’t remember Willie Brown’s interception return (forgive me, I was 6 years old), otherwise that might have made this list.

As always, I won’t base this list on “That’s my favorite play because my team scored” kind of memories, but you sure can in the comments section! Let’s get to it!

10. Super Bowl 36 — Adam Vinatieri‘s winning field goal. The Rams came into the game heavy favorites to collect their second straight title. The Patriots led 17-3 after three quarters, a Ty Law interception return for a score being a huge early turning point. The Rams scorching offense tied the score with 1:37 to go in the game, putting the pressure on Tom Brady to deliver. His 5 completions set up a 48-yard field goal attempt, which Vinatieri nailed. I’m too young to remember Jim O’Brien‘s winning FG in Super Bowl 5, but I certainly remember Scott Norwood‘s miss in Super Bowl 25. Vinatieri’s kick was a yard longer than Norwood’s attempt, but AV had the advantage of kicking in the Superdome, without wind gusts to push the ball wide. Still a very exciting moment, as we all wondered if Super Bowl 36 would be the first to enter into overtime. 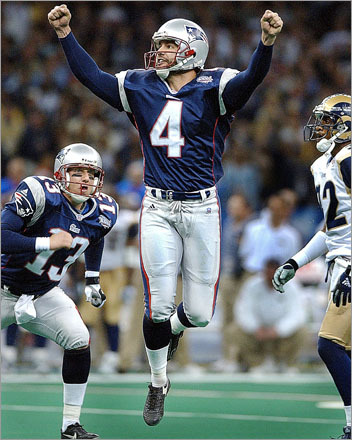 9. Super Bowl 31 – Desmond Howard’s kickoff return. The Packers seemed like a team of destiny. Reggie White, the spiritual leader, and a then youngster from Mississippi name Brett Favre led the Green and Gold back to their glory days, putting together both the top offense and defense under a coaching staff that included a ridiculous amount of future head coaches. But it was Desmond Howard’s kickoff return that everyone remembers from that game, coming at a point when it looked like the Drew Bledsoe led Patriots might have a chance. Howard slammed the door shut and won MVP honors.

8. Super Bowl 43 – Santonio Holmes’ amazing catch. A crazy game that looked like a lock for the Steelers as Bruce Springsteen took the stage at halftime. Kurt Warner and Larry Fitzgerald weren’t going away quietly, however, and that 20-7 Steeler lead with 8 minutes left in the game turned into a 23-20 Cardinals lead after two Fitzgerald touchdowns and a safety in 5 minutes. Ben Roethlisberger’s toughness willed the Black and Gold downfield in the closing moments. Santonio Holmes scored the game-winning touchdown with seconds left, a breathtaking catch that demonstrated exceptional concentration and balance in a most pressure-filled situation. 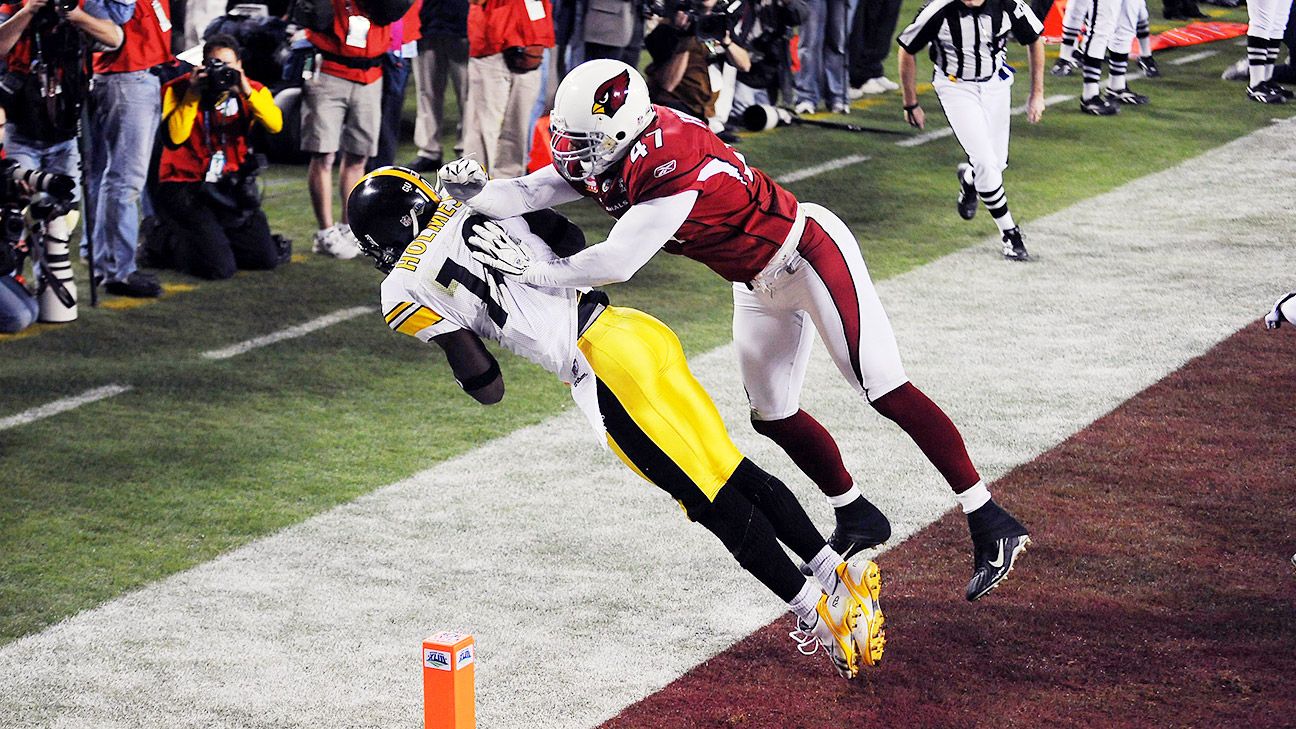 7. Super Bowl 49 – Malcolm Butler’s interception. A lot of people criticize the play call, but the amount of preparation Butler put in to make that play – the film study, reading the formation – that’s what makes this play truly remarkable to me. For Butler, a rookie, to make that kind of a play with the Super Bowl on the line will always stand out in my mind far above whether the correct play was called. NFL football comes down to who executes best no matter what the play call, and Butler positioned himself based on his preparation. That’s a champion.

6. Super Bowl 17 — John Riggins‘ first down and more. Joe Gibbs beat Bill Belichick to the playbook punch. Gibbs went for it on fourth-and-one with just over 10 minutes left in the game, the Miami Dolphins leading his Washington Redskins 17-13. Miami founded its lead on two huge plays — a 76-yard David Woodley to Jimmy Cefalo touchdown and a 98-yard Fulton Walker kickoff return. The biggest play of the game belonged to Riggins, however, his 43-yard glorious scoring rumble on fourth down not only put Washington up for good, it paved Riggins’ way to Canton. If any Hall of Fame member had his career immortalized from one single play, it would be Riggins from this play.

5. Super Bowl 18 — Marcus Allen reverses field. Tables turned the next year as the Los Angeles Raiders pounded Riggins’ Redskins 38-9. One play after the Raiders ironically stuffed Riggins on a fourth-and-one, Allen donated his own epic moment in Super Bowl lore. The play seemed almost doomed from the start, as Jim Plunkett nearly bumped straight into Allen. Allen nearly ran straight into Washington linebacker Rich Milot, but Milot was too busy fighting off three Raider linemen. Allen then found himself trapped by two more defenders — Ken Coffey and Ted Liebenstein. Allen reversed field, squeezed through an opening up the middle, and raced for paydirt, out maneuvering a diving Neal Olkewicz and a sprinting Anthony Washington. Cliff Branch made a nice block on Anthony Washington at the end, and Allen’s magic permanently carved itself into the memories of everybody watching. Words can’t describe it like this video on the NFL’s website.

4. Super Bowl 13 — Rocky Bleier’s catch. Super Bowl 13 is the most exciting Super Bowl from start to finish that I remember. As the Steelers and Cowboys battled it out for Team of the 70s supremacy, the game produced a lifetime of memories. Thomas Henderson stripping the ball from Terry Bradshaw and Mike Hegman returned the fumble for a Cowboys touchdown. Franco Harris rushing up the middle for a key score, with Lynn Swann following shortly afterward with his own touchdown. The Swann touchdown followed a very controversial pass interference call against Cowboy Bennie Barnes, and of course there’s also the sure Cowboy touchdown that Hall of Fame tight end Jackie Smith dropped. The play that made the cover of Sports Illustrated, however, was a leaping Rocky Bleier collecting a late first-half touchdown that Rocky loves to point out “gave us a lead we never relinquished.” Rocky tells the story of his catch in The Game before the Money, noting that he fooled Cowboy linebacker D.D. Lewis into moving up toward the line of scrimmage before Rocky drifted back into the end zone for the score. 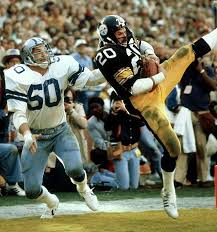 3. Super Bowl 34 — Mike Jones tackles Kevin Dyson. The Titans had tied the game at 16, as Al Del Greco‘s field goal soared between the uprights with just over 3 minutes left in the game. On the Rams first play of their next possession, quarterback Kurt Warner connected with Isaac Bruce for a 73-yard touchdown. The score and ensuing kickoff shaved over a minute off the clock, leaving Titans quarterback Steve McNair with only 1:48 to drive 88 yards. McNair completed 5 passes and the Rams committed 3 penalties, setting the Titans up on the Ram 25 with 5 seconds remaining. Everybody watching knew a fantastic finished awaited. McNair hit Dyson over the middle, and Jones made an outstanding open-field tackle one yard shy of the goal line. Between the Rams quick TD and the Titans final drive, Super Bowl 34 remains quite possibly the most exciting finish I can remember. 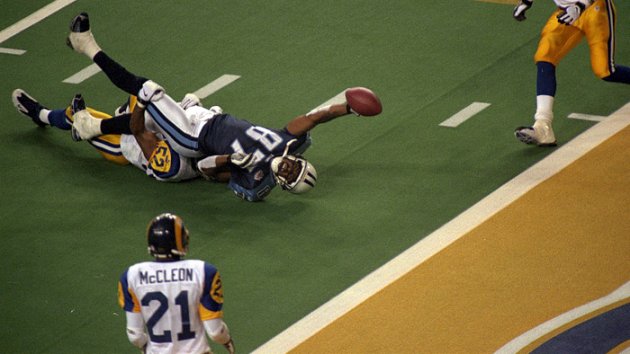 2. Super Bowl 42 — How did David Tyree catch that? The Helmet Catch. I remember watching the replays, astounded that the ball didn’t hit the ground. I’m not usually one to trumpet the sensationalized freak plays, but the context in which this catch was made makes it ultra-special. The catch trashed the Patriots undefeated regular season, kept the 1972 Dolphins alive as the only undefeated team in the modern era, and Eli Manning was no longer just Peyton Manning‘s little brother. While most credit should be given to the Giants defensive line for bull rushing Tom Brady all night, the crazy catch became the most memorable moment. 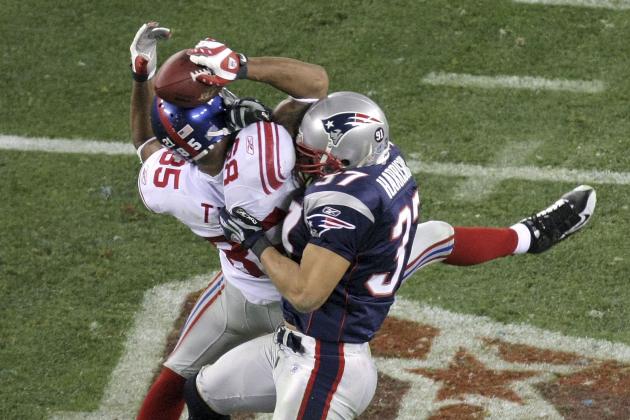 1. Super Bowl 23 — Montana to Taylor. The Bengals had an excellent team that year. I wasn’t surprised that they held their own against the 49ers, although I was very impressed they did so without defensive standout Tim Krumrie, who went down with a broken leg early in the game. Neither offense did much for most of that day. In fact, the first touchdown wasn’t scored until there were seconds left in the third quarter, and it was on Stanford Jennings‘ 93-yard kickoff return which gave the Bengals a 13-6 lead going into the final quarter. Joe Montana hit game MVP Jerry Rice for the game’s first offensive touchdown, tying it at 13 early in the fourth. Both offenses continued to struggle, but Boomer Esiason drove the Bengals to the 49er 22 for a go-ahead field goal. The drive shaved over 5 minutes off the clock, and left Montana with just 3:04 to drive 92 yards. After famously pointing out John Candy in the crowd, Montana completed 7 of 8 passes, the last one to John Taylor for the winning touchdown with just 34 seconds remaining. Joe Cool strikes again. 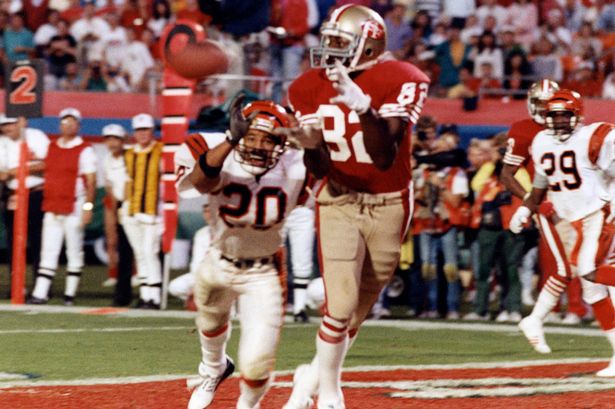 Every Super Bowl has its defining its moments. Sometimes they happen early, like the Seahawks early safety in Super Bowl 48. When they happen in groups, during multiple spots, or at the end, those games tend to be the most memorable and exciting. Super Bowl 13 is a great example.

Other moments that almost made the list include John Stallworth‘s 73-yard touchdown in Super Bowl 14. That game was much closer than the 31-19 final indicates. The Rams led 19-17 in the fourth quarter before Stallworth’s score.

Clay Matthews slamming Rashard Mendenhall and forcing a critical fumble in Super Bowl 45 also stands out. The Cowboys defense smothering Jim Kelly near the goal line, forcing an interception returned for a touchdown was another defensive play that almost made the list.

READ THE STORIES OF MEN WHO PLAYED IN THE SUPER BOWL AND THE NFL AND AFL CHAMPIONSHIP GAMES.

ORDER THE GAME BEFORE THE MONEY ON AMAZON TODAY! (ALSO ON KINDLE)

ALSO AVAILABLE AT BARNES AND NOBLE (AND ON NOOK)