Did the College Football Playoff Expand?

There will be at least one Group of 5 team in the College Football Playoff – meaning a team from a non-Power 5 conference will get in every year – regardless of whether they are ranked in the Top 12. If the format stays identical to what was originally announced, the top four teams will get a bye. No 12 will play at No. 5 – either at the fifth ranked team’s home field or at a stadium selected by the fifth-ranked team. No 11 will play at No 6 – and so forth.

The Big 12’s exclusion from the 2014 playoffs amplified calls for expanded playoffs. Arguments for Stanford rang out in 2015, proponents insisting the Pac-12 compiles the strongest conference schedule.

Expanded playoffs grant more teams a shot at the national championship. Simple. Obvious. Why not give Baylor and TCU a chance last year? Stanford had an Outland Trophy winner and a Heisman Trophy finalist in 2015. Why not let them in? Wouldn’t more teams generate more excitement?

In principle, playoff expansion is simple. Let’s dig a little deeper, however, and question if expanded playoffs are better for the game.

The college football playoff committee selected Clemson, Alabama, Michigan State, and Oklahoma as the 2015/2016 national championship field. An 8-team playoff in 2015 would pit Clemson against Notre Dame in the first round. Clemson already defeated Notre Dame on October 3rd. If Ohio State beat Alabama in the #7 vs #2 matchup, and Michigan State topped Stanford in the #3 vs #6 showdown, you would have Ohio State and Michigan State playing each other in the second round. Didn’t we watch that game a few weeks ago? 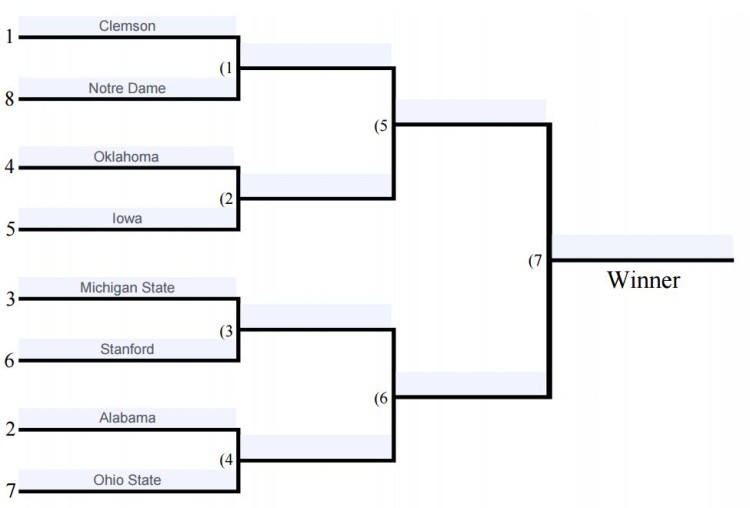 If Iowa won two games and Michigan State beat Ohio State, you would witness rematches at every stage of the playoff. The combination of a regular season conference schedule, plus a conference championship game, plus an expanded playoff, also opens the door for teams facing off three times. Iowa could lose to Michigan State during the regular season schedule (NOTE: they didn’t play this year), lose to the Spartans in the Big 10 Championship, and still defeat them for the national championship. We accept these scenarios in college basketball, perhaps due to a longer season. The whole point of the BCS and playoffs, however, was to define an undeniable champion.

A 16-team playoff in 2014 would place Alabama against Missouri in back-to-back games. That opens the possibility – admittedly small – of a 3-loss Missouri team losing the SEC Championship to Alabama, then subsequently knocking them out of the national picture. TCU would face Kansas State, a team they trounced by three touchdowns in the regular season. The second round would potentially tout an Alabama-Mississippi rematch, and an Oregon/Arizona Part 3 (the earlier games were split). The winner of the Oregon/Arizona take 3 would potentially land a rematch against UCLA in the semi-final. Oregon or Arizona could find themselves in the National Championship Game without playing a non-conference opponent!

2014 Sixteen-Team Playoff (Based on Final Rankings) 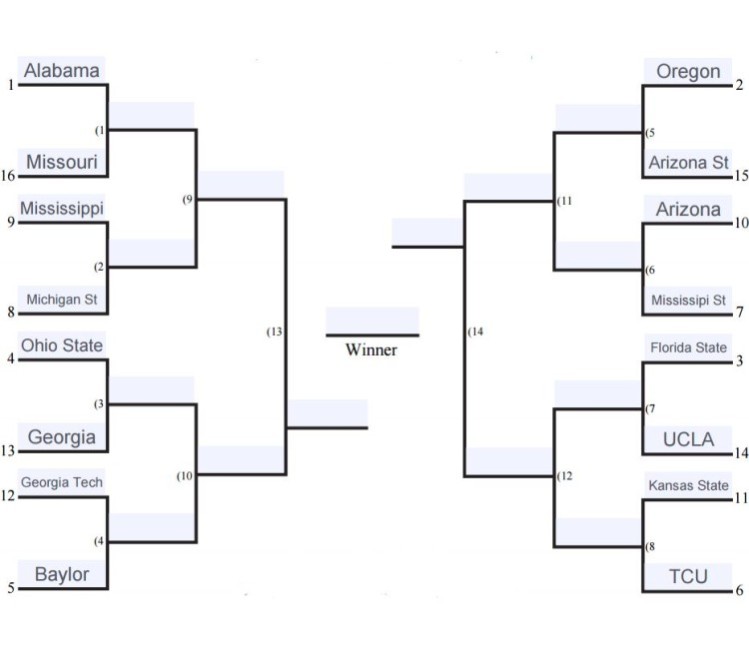 The SEC enters a scenario deeper than the Pac-12 situation. Alabama could hypothetically knock off Mizzou before beating Ole Miss in the second round. Additionally, Alabama could play Georgia in the semi-final and Mississippi State in the National Championship game. The Tide could claim the crown playing only SEC opponents!

Critics might argue about the likelihood of UCLA or Georgia making it to the third round, or Mississippi State making the final. Yet that’s supposedly the basis of expanded playoffs, to provide opportunity to such teams. If they don’t have a chance of winning, why include them?

One might say that the playoff committee wouldn’t set brackets up in that fashion. Such thinking undermines the ethics of the rankings. Would Oregon be ranked #1 and Alabama #2 in 2014 to avoid rematches? Would they have flipped Notre Dame and Ohio State in 2015? Those actions swim into very murky waters.

You might select brackets like the NCAA does for March Madness, but that leaves the possibility for inferior teams usurping opportunities from better squads. The BCS limited conferences to two teams, and such rules would have eliminated seventh-ranked Ohio State in 2015. Florida State or North Carolina would have likely replaced the Buckeyes, who would have lost a shot at defending their title to teams with lesser records.

Larger playoffs raise interesting thoughts about what championships mean. In the old days, the Yankees or Dodgers required excellence throughout the schedule to win the pennant. In modern times, a team finishing a few games over .500 can win the World Series. The Super Bowl champion Packers of 2010 can just get hot over two months and equal the 1961 champion Packers. Notre Dame winning this year’s National Championship Game sounds like an exciting run, but were they the best team in college football this year? Highly unlikely.

My intent isn’t to discount the 2006 Cardinals, 2010 Packers, or any other team winning an expanded playoff pool. However, it’s quite thought provoking to reflect on how championships have changed. The objective of proving the best team gets obscured with a larger mix of teams.

The BCS, despite creating one of the most exciting college football games in history, proved ineffective. Eight-team and sixteen-team playoffs don’t appear as thrilling upon examination, especially considering that from the BCS forward the mission was improving over the “mythical national championship.”

Experience pro football history through the eyes of NFL legends like Bart Starr, Frank Gifford, and Carl Eller. Read The Game before the Money.

AVAILABLE FROM BARNES AND NOBLE HERE (ALSO ON NOOK!)