Before the NFL Combine and NFL scouting departments, teams sent questionnaires to prospects to gather information before the draft. This continued at least through the late 1960s.

In the summer of 1982, I attended a Milwaukee Brewers game against the Baltimore Orioles with my Little League teammate Chuck Hable and his dad. Three things stick out about that day: 1) Ben Oglivie hit a late double, spurring the Brewers to a 9-7 victory. 2) Retroactive research shows Cal Ripken was less than two weeks into his consecutive games streak. 3) Chuck brought along his dad’s binoculars. The case bore an emblem that said, “Rose Bowl Particpant.”

Several NFL teams sent Hable inquiries. I’ve always wanted to see a questionnaire after Bob Skoronski and Rocky Bleier both discussed them in The Game before the Money. Teams created their own forms, and it’s interesting to note the differences. All asked about potential military obligations.

CHICAGO CARDINALS
The Chicago Cardinals were only a few years removed from back-to-back championship game appearances when they contacted Hable. They sent a formal letter, requesting Hable’s marital status in the postscript. The letter addressed the popular notion that pro football was a step down from college by stating, “Professional football is a very fine game and the spirit on our Cardinal club is as good as there is on any college in the country.” 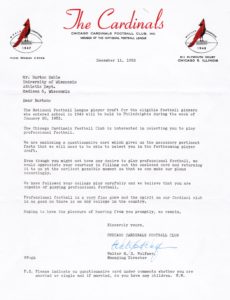 The Cleveland Browns were among the league’s elite in the 1950s. Coach Paul Brown and quarterback Otto Graham led them to several championship games, three against the Detroit Lions. The Browns sent prospects like Hable postcard and a note from assistant coach Weeb Ewbank. The card, pre-addressed and stamped, asked if the player’s speed was “Fast, Average, or Slow,” and requested a 100-yard dash time. The Browns also put prospects to work as team scouts, asking for the names of outstanding teammates and opponents. We don’t see that on the other questionnaires we have here. Perhaps that was one factor in the Browns acquiring great talent in those days. 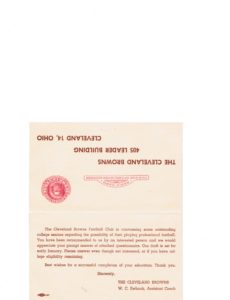 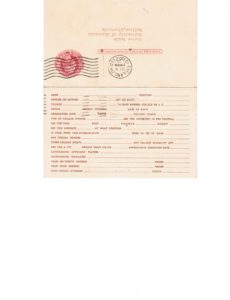 The Packers letter came directly from their head coach, Gene Ronzani. Note the color of the letterhead. The team colors are still the blue and gold Curly Lambeau chose when he founded the team, copying the colors Lambeau wore for Knute Rockne at Notre Dame. (Vince Lombardi would later change the colors to the current green and yellow.) Ronzani spends an entire paragraph explaining the Packers policy to not recruit players with college eligibility remaining. Perhaps this dates back to the days when Lambeau faced stern penalties for using college players illegally, nearly causing him to lose the team. The Packers left space for player comments, and what a treat it would be to read what Bart Starr, Forrest Gregg or Jim Taylor might have written on theirs. 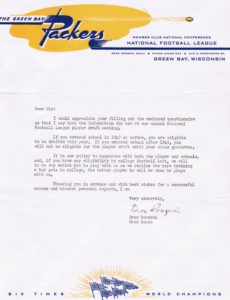 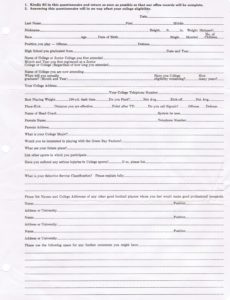 Washington apparently used lower quality typewriter ribbons than other teams, as this form is quite faded. Whereas the Cardinals claim to have followed Hable closely, the Redskins simply say, “You have been recommended as a prospective professional football player,” and employ a cold “Dear Sir” salutation. The letter came from Herman Ball, a former Washington head coach turned head scout. The form seems to have little to do with football, asking more about marital and military status. The club only asks for age, size, and position played as relevant athletic information. One can conclude that the questionnaires provided much more pertinent information to the winning Cleveland franchise than the perennial lackluster Washington squad. This perhaps led to better drafts for the Browns. 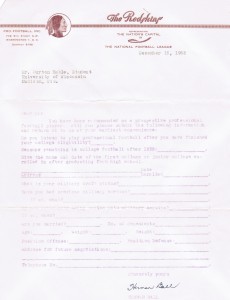 Today’s NFL prospects envision huge dollar signs while the NFL draft approaches. Things were much different in The Game before the Money era. Prospects factored in many life circumstances when deciding on pursuing a pro football career.

Hable, like many college standouts, spurned pro football for a variety of reasons. He and his wife were expecting their first child, and Hable sought more than the unpredictable employment the NFL offered. The wages required getting a second job in the off-season, and traveling to road games would take time away from his family. Like many, he held the college game in higher stature than the pro game. Badger home games regularly attracted 50,000 fans to Camp Randall Stadium. Conversely, the Packers only drew about 20,000 to their games to City Stadium, and dressed in a high school locker room.

Hable didn’t respond to the NFL teams’ letters, and accepted a history teaching job at Madison West High School. Head football coach Fred Jacoby asked Hable to be an assistant during the first year of what would be a 40-year teaching career. Jacoby soon left for the college ranks, and later served as commissioner of the Southwest Conference. Hable assumed the head coaching duties at Madison West.

Hable was eligible for the 1953 NFL Draft. Four of his teammates were picked: guard Bob Kennedy by the Packers; tackle Charley Berndt by the Cardinals; halfback Harland Carl by the Bears; and guard Dave Suminski by Washington. Only Carl and Suminski saw regular season NFL action. Hable’s teammate Alan Ameche, a sophomore during the Rose Bowl season, proved to have the most successful NFL career. He scored the famous game-winning touchdown in the 1958 NFL Championship for the Baltimore Colts.

San Francisco drafted Georgia receiver Harry Babcock with the first-overall pick. Injuries unfortunately truncated his career. Wally Butts, Georgia’s legendary football coach, called him both the best receiver and best blocker he ever coached. The Steelers drafted Babcock in the 21st round of the 1952 draft, accidentally wasting the pick on the ineligible junior.

Special thanks to Coach Hable’s son Chuck for sharing these letters. 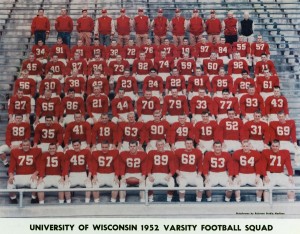 Color footage of the 1953 Rose Bowl between Wisconsin and USC.

Read stories from NFL legends in The Game before the Money: Voices of the Men Who Built the NFL.

AVAILABLE FROM BARNES AND NOBLE HERE (ALSO ON NOOK!)