Austin “Goose” Gonsoulin passed away early Monday morning, September 8, 2014. I had the good fortune of getting to know him. We spent several hours on the phone together over the past couple of years, Goose spinning yarns about the old days. He was tremendously friendly, open, jovial, and I’m very grateful that I had a chance to connect with him.

Austin picked up the “Goose” moniker in college: “We had a coach named Hayden Fry, who went on after Baylor to other colleges. My senior year, I was running a punt back and he hollered, ‘Come on, Goose!’” he explained.

Goose wasn’t particularly fond of the name at first, but over the years he came to appreciate it.

The Dallas Texans scooped up Gonsoulin in the first ever AFL draft in 1960. The San Francisco 49ers selected him in the NFL draft. He signed with the Texans for $8,500. The Denver Broncos promptly traded for him, and he’s widely regarded as the first member of the Broncos franchise. Goose surmised Dean Griffin, Denver’s general manager, liked what he saw of Goose in a college all-star game called the Copper Bowl.

Goose quickly impacted the fledgling league. He intercepted the first pass ever thrown in the AFL, and his second interception of the game stopped the Boston Patriots’ potential winning drive. Gonsoulin amassed 7 interceptions in the first 3 games.

Goose recalled: “We came in the dressing room, and guys interviewed me. I said, ‘What’s the record?’

Goose chuckled about the comment, noting that his league-leading total topped out at 11 interceptions. While not a professional record (Dick Night Train Lane still holds it with 14), Gonsoulin still holds the single-season mark in Denver.

Goose retired with the most career interceptions in Bronco history, a mark he held until Steve Foley snagged it away in 1987. “Steve Foley finally beat my career record by one interception, but he played in 150 games and I played 108. I wish they’d put a little asterisk by that like they did with Roger Maris beating Babe Ruth,” Goose noted with a laugh. Nobody, however, will eclipse his AFL career mark for interceptions by a safety. Such feats landed Gonsoulin on the AFL All-Time team roster (2nd team).

Goose only played with the Broncos from 1960-1966. He returned to Denver for the 1967 season, coming off a Pro Bowl-decorated 1966 campaign. He received an anonymous phone call telling him he had been released. Goose couldn’t believe it.

“I said, ‘Released? What are you talking about?’

I wasn’t sure. When somebody just calls you on the phone, you don’t know if they’re pulling your leg. I got into my car and started driving. I was listening to the radio, and a guy comes on said, ‘Well, we lost ol’ Goose today.’”

The 49ers still held Gonsoulin’s rights from the 1960 NFL draft. Goose bolstered their secondary at safety in 1967, although a neck injury caused him to miss a couple of games. Goose returned for 1968, but the team told him the neck injury prevented him from playing. The move surprised Goose after he had played 9 games after the injury. His excellent career ended on that note.

I’ll close this piece with an excerpt from Goose’s chapter in The Game before the Money. It’s one of my favorite Goose stories.

“I played in another exhibition game, against Oakland at the Los Angeles Coliseum. After the game was over, this guy comes in our locker room and says, ‘Hey Goose. Good game.’

He handed me a piece of chalk and said, ‘What’s the hardest play for you to cover?’

I thought, ‘Somebody’s up to something.’

I drew an easy play to cover.

Our general manager walks in and says, ‘Al! What are you doing in our dressing room? Get out of here!’

That was the first time I met Al Davis.”

NOTE: All quotes in the above post are from The Game before the Money: Voices of the Men Who Built the NFL, published by the University of Nebraska Press. 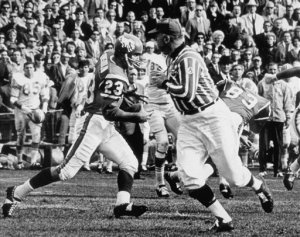 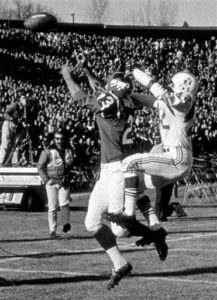