I had lunch with New York Jets legend and Pro Football Hall of Fame inductee Don Maynard in Riodoso, New Mexico recently. He lives there part-time, helping his son and daughter maintain an RV park they own. Don spoke in-depth about his NFL career with Joe Namath and the New York Jets. I’ll type this up as a three-part series, starting with Don’s specialized game equipment, then following up with separate inside looks at the Jets passing game and their magical run to Super Bowl 3.

Maynard is a brilliant man and originally attended Rice to study petroleum engineering. He then transferred to Texas Western (now UTEP). Don modified car engines in the 1960s to run off propane, long before Ford and Toyota unveiled concepts like “Flex-Fuel.” His intelligence led him to design gear modifications that worked to his advantage on the football field.

Maynard didn’t like the feel of the chinstrap, so he never wore one. Instead, he had specially designed cheek pads to hold his helmet on tightly. Note how the pads stuck outside of the helmet in the photos below. When asked how many times he lost his helmet, Don replied, “Twice.” 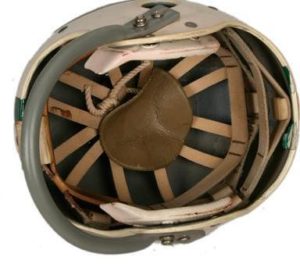 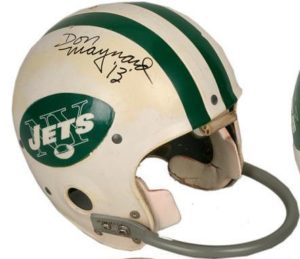 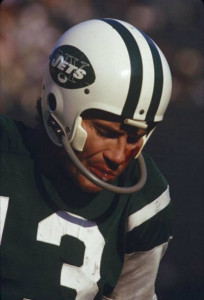 The first time, Tony Banfield of the Oilers shoved his hand against Maynard’s forehead, and ripped Maynard’s helmet off in the process. Maynard later watched game film questioning if the hit was legal, and deemed it a clean hit. Maynard noted Banfield and Goose Gonsoulin as the two of the best defensive backs he faced.

Fred Williamson, nicknamed “The Hammer” for his forearm club tackling technique, had the tactic backfire the other time Don lost his helmet. “I might have gotten a headache out of the deal, but he broke his arm,” Don quipped in describing the play.

CAN SHOES MAKE YOU RUN FASTER?

Don, a collegiate track star, possessed exceptional speed. He found an added advantage in cleats Puma made especially for him. “They were almost like soccer shoes, and had about 24 cleats.” He pointed out that traditional football footwear has far fewer cleats. The Nike Alpha Pro TD worn by Larry Fitzgerald and many others has about 12. The extra cleats provided better traction, and accented Maynard’s quickness.

“I originally ordered 3 or 4 pairs, but once I got them, I ordered about 10 more.” Maynard would wear a pair for a full season only on game day, The next year he’d wear a new pair for games, and use the previous season’s pair at practice.

Practically every piece of equipment Maynard wore was specially designed from head to toe. Many times it was because traditional gear felt uncomfortable. Ill-fitting gear might hamper a player’s movement or distract him.

Besides Don’s shoes and helmet, he was the first player to wear a V-neck jersey. The jersey extended to mid-thigh, longer than most, to provide extra warmth.  His mouthgaurd was specifically molded for his mouth. Don’s shoulder pads came down to protect his chest, but were cut out near the shoulders to improve mobility. Don even had his belt and jock strap made out of elastic to increase movement, making bending easier on low throws. His character trait of ingenuity enhanced his talents, helping his team win an historic championship while blazing his own personal trail to Canton, Ohio.