In honor of the NFL playoffs and the recent passing of Allie Sherman, we examine an overlooked classic. This is part one of a two-part series. I’ll write the game’s action in present tense, hopefully giving a feel for the events unfolding live.

The 1962 NFL Championship was a heavyweight showdown. The prizefighters were the Green Bay Packers, entering the game with a 13-1 record, and the 12-2 New York Giants who hadn’t lost since mid-October. Both head coaches – Allie Sherman and Vince Lombardi – had been assistants with the Giants under Jim Lee Howell.

The teams didn’t meet in the regular season. Their last rendezvous was the 1961 NFL Championship at Lambeau Field, a 37-0 Packer victory. The Giants hungered to avenge the embarrassment. Fans also wanted revenge. A “Beat Green Bay! Beat Green Bay!” chant thundered from the stands, and one fan hoisted a “OK YA – Make Green Bay Pay” sign in the end zone seats at Yankee Stadium.

Fifteen future Hall of Famers lined up that day. The Packers offensive line boasted two, plus Jerry Kramer, for whom many fans vehemently advocate HOF membership. The Giants defensive line countered with their own Hall of Famer in Andy Robustelli, plus two All-Pros — Rosey Grier and Jim Katcavage. Dick Modzelewski was no slouch either.

The teams not only fought each other, but also fierce cold. The official temperature was 20 degrees at kickoff, and dipped to 14 by the final gun. Tolerable football weather, but the 25-30mph winds that gusted up to 45mph made it feel much colder. Vince Lombardi Jr. remembers feeling colder than during the Ice Bowl.

The wind fittingly blows the ball off the tee before Willie Wood kicks off. Rookie Earl Gros holds it for Wood, and Joe Morrison returns the ball to the Giant 30. The Giants start on the ground. Three straight handoffs – one to Alex Webster and two to Phil King – establish the running game nicely. The Giants move to their own 46. 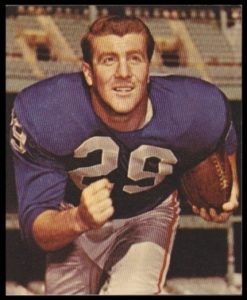 Alex Webster was a key part of the Giants offense for a decade.

Y.A. Tittle drops back and gets pressured up the middle. He spots All-Pro receiver Del Shofner wide open on the sideline, but overthrows him. We soon find out how Shofner got open. A 15-yard offensive pass interference penalty gets marked off, and the Giants have 1st and 25 on the 31. Webster gains 11 back, but two incompletions force the Giants to punt. Don Chandler’s punt nearly gets downed by Mickey Walker at the 2, but bounces into the end zone. The Packers score the first break with a touchback.

Paul Hornung runs for two yards. Erich Barnes forearm clubs Hornung in the head, long after the whistle. What would be a penalty, fine, and possible suspension today doesn’t raise an eyebrow.

Hear NFL and college football legends share their stories! Subscribe to The Game before the Money Podcast on your favorite listening platform, including on Apple Podcasts, iHeartRadio, Spotify, Stitcher, and Google Play.

Jim Taylor, the league’s leading rusher and MVP, takes the ball 10 yards to the Packer 34. Bart Starr hits Ron Kramer for another 10 yards. Taylor then exacts revenge for Hornung by plowing over Barnes on a sweep, en route to 14 yards. The Packer offense is cruising, and is across midfield.

Starr throws an incomplete pass, however, and then Taylor fumbles on a draw play. Jerry Kramer pounces on the ball — a second early break. Green Bay runs a screen to the right to Taylor. He scampers to the Giant 29, picking up a first down. After a 3-yard run, Green Bay sets up a screen to the left to Taylor. Fuzzy Thurston’s block springs him to the 19. 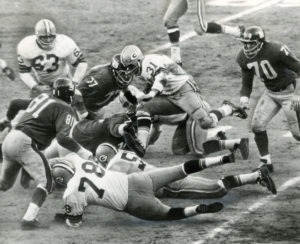 The refs measure for a first. Kramer, who started the game with a fractured rib, leaves the field. The refs take a bit to decide it’s 3rd and 1, and Kramer runs back to the huddle. He doesn’t even miss a play.

Taylor takes the ensuing handoff, but Dick Modzelewiski, Rosey Grier, and Sam Huff combine to stop the play cold. Lombardi chooses the field goal. Kramer, who took over kicking duties after Hornung’s mid-season knee injury, boots it through the swirling winds and between the uprights. The Packers lead 3-0. 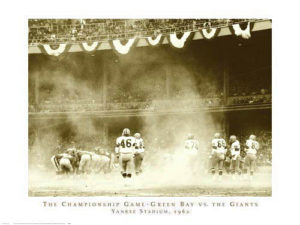 Sam Horner makes a nice kickoff return to the Giant 38. Phil King rushes for 5 yards, Alex Webster for 3. Tittle then completes his first pass of the day, a strike to Shofner that puts the Giants at the Packer 33. Tittle goes right back to Shofner for another 8 yards. A screen to King gets to the 16, and the Giants look poised to take the lead.

Ray Nitschke has other ideas. He stuffs King on a draw play, then charges Tittle on a 2nd and 9 throw. Nitschke deflects the pass, which becomes the equivalent to a pop fly for Packer linebacker Dan Currie. Currie intercepts the ball and has clear sailing to the end zone. Currie’s injured knee begins wobbling, however, and he collapses around the Packer 40.

Two incomplete passes later, Paul Hornung runs towards the right end, appearing to look downfield to throw. He keeps the ball, however, and scampers to midfield for a first down.

Taylor gets stuffed by Andy Robestelli and Jim Patton. He now has 7 carries for 38 yards. On 2nd and 10, Bart Starr hits Ron Kramer at the Giant 34. That makes 6 first downs for the Packers already. Taylor takes the ball on the next three plays, and Huff, Katcavage, and Patton team up to stop him. Huff hits Taylor well after the whistle on 3rd down, but under 1962 rules the ref pays no mind. Perhaps he’s just thankful Ol’ Sam didn’t plow into him by accident.

The first quarter ends with the Packers missing a field goal. Kicking with a fractured rib in 35mph winds can do that to a guy, I guess.

The Giants dodge the turnover bullet and start on their own 20. They alternate handoffs to King and Webster. Three runs give them a first down at their 32. The Giants shift gears, but throw three straight incompletions. The wind really affects the passing game today. Frank Gifford would say, “(Tittle) threw one at me which I started to catch, when the wind caught it and it suddenly flew 10 feet over my head.”

The Giants punt. Rookie Jim Collier smothers return man Elijah Pitts as he catches it. The Packers set up shop at their own 32. Both teams have had pretty good field position thus far, but it hasn’t amounted to many points. Hornung runs the sweep behind fine blocks by Kramer and Thurston, and breaks an Erich Barnes tackle. Hornung bursts for 6 more yards on a draw.

It’s a beautiful thing to watch Paul Hornung run. He dodges defenders with miniscule lateral movements that maintain his forward speed. He doesn’t cut so much as gracefully run around people. 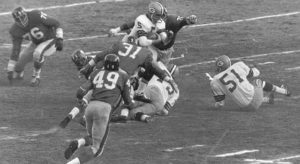 Jim Taylor takes the next handoff, and his forward progress carries him to the Giant 47 and a first down. Again, Huff and Barnes provide extracurricular violence after the whistle, this time in the form of a headlock. Taylor, who needed stitches for his elbow at halftime, noted that he and Huff exchanged uncouth words. While shouting, Taylor accidently bit his tongue.

Looking for a great NFL history book? Check out The Game Before the Money: Voices of the Men Who Built the NFL available at — Amazon.com – Barnes and Noble – University of Nebraska Press

Starr misses on first down, and on second the Giants stuff a screen to Taylor. Starr fades back on third, skids on the slippery turf, and throws a dart to Boyd Dowler for a first down at the Giant 33.

Dick Modzelewski gets even on the next play, sacking Starr for an 11-yard setback. The Packer drive stalls, and Max McGee’s punt is downed at the Giant 5. The first time anyone’s been bottled up in their own territory. 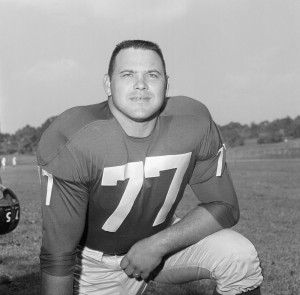 The Packers fare no better on their subsequent possession – 3 rushes, no first down. Grier and Huff punctuate the Giants swagger by thumping Taylor for a 4-yard loss on third. Max McGee’s short punt puts the Giants at their 29.

Three Packers close in on Tittle, but Tittle deftly lofts a screen to Phil King for 6. On second down at the 34, Dan Currie pops King at the line of scrimmage, forcing a fumble. The ball bounces into the Giants backfield, behind two unaware Giant linemen, Darrell Dess and Ray Wietecha. Ray Nitschke recovers for Green Bay. 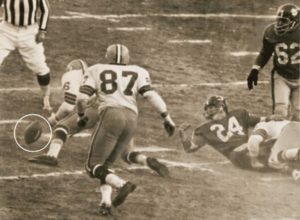 The Packers give to Hornung. He rolls right. He abruptly pulls up and floats a pass to Dowler at the Giant 8. Forrest Gregg and Jerry Kramer trade blocking assignments for the next play. Jim Taylor follows center Jim Ringo’s block and plows into the end zone. Kramer connects on the extra point and it’s 10-0 Packers with 2:39 left in the half. 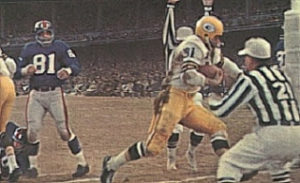 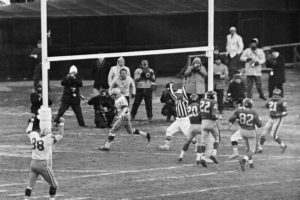 Ringo didn’t know if he’d play in this game. A pinched nerve removed feeling in his right arm. He couldn’t snap with his right hand, and switched to using his left.

The ball again blows off the tee on the ensuing kickoff. The gusts reportedly tore two stripes off the American flag, and at one point the swirls had flags blowing in opposite directions. Earl Gros holds the ball for Willie Wood, and Johnny Counts takes it from the 9. He bursts up a middle seam, and breaks all the way to the Giants 41 before Wood makes a shoestring tackle. New York’s special teams have produced excellent return yardage thus far.

Webster runs for 3, taking us to the 2-minute warning. There is no commercial break on the broadcast, much different than today’s NFL. On 2nd and 7, Frank Gifford runs a deep route and tight end Joe Walton flares right. Tittle hits Walton at the Packer 41, and Walton scurries out of bounds to stop the clock.

Henry Jordan and Bill Quinlan stuff Phil King on first, and then Tittle misses Gifford and Walton on second and third down. The drive stalls on the Packer 39. The wind takes Don Chandler’s field goal attempt far right.

1962 rules place the ball back at the Packer 20. The Packers run out the clock and take a 10-0 lead into halftime.

The wind stifles the passing game, the Giants major strength. Lombardi would state he wished to surprise the Giants with his own passing attack, but the weather prevented it. Turnovers and random football bounces have consistently helped the Packers and hurt the Giants.

Both teams are playing exceptional defense. The Giants style looks a more physical, smashmouth style. The Packers look more disciplined and designed, each man covering his own assignment. 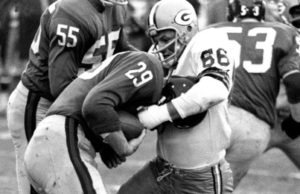