Fifty years ago this week, on October 25, 1964, Jim Marshall of the Minnesota Vikings pulled one of the NFL’s ultimate blunders. He recovered a fumble, rumbled downfield, and crossed the goal line – for a safety. Many remember the play a farce at Marshall’s expense. But how justified is the amusement?

I discussed the play with Marshall’s Hall of Fame teammate, Carl Eller. I first, however, asked about a seldom known fact: Carl returned a fumble earlier that quarter for a touchdown. A surprised Eller said, “Most people remember the wrong way run by Jim Marshall during my rookie year, and a lot of people only remember that. What people don’t remember is that I returned a fumble for a touchdown right before that….John Brodie was the (49ers) quarterback. I think Jim (Marshall) hit him and the ball snapped out. I picked up the ball and ran for a 45-yard touchdown in Gale Sayers–like fashion. [Laughs.]”

Eller then recalled the infamous play, providing new perspective. “The Jim Marshall play was very similar, but Jim was coming from the other side. We reversed fields chasing a flat pass Brodie had thrown to Billy Kilmer. Marshall picked up the ball and kept running, not realizing he was going in the opposite direction. My thought was, ‘He’s going to have a longer touchdown than mine.’ I also didn’t realize he was running the wrong way at first.”

The play’s confusion led to Marshall running the wrong direction. NFL action drops like lightning, players exert an enormous amount of energy and often battle mental and physical exhaustion on top of opponents. Adding these elements together with Eller’s recollection adds sense to what many simply write off as a bonehead play.

In case you’re wondering, the Vikings held on for a 27-22 victory at San Francisco’s Kezar Stadium. Watching the play now, do you have a different view of the “Wrong Way Run?”

NOTE: All above quotes are from The Game before the Money: Voices of the Men Who Built the NFL, published by the University of Nebraska Press. ORDER YOUR COPY TODAY! 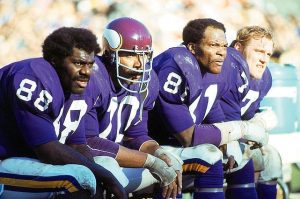 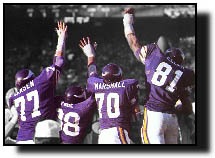