Tom Landry is the man who was the first head coach of the Dallas Cowboys. He won two Super Bowls as the Dallas Cowboys head coach and led them to three other appearances. He was often affiliated with his trademark fedora that he wore on the sidelines. He coached several legendary Dallas Cowboys in the Pro Football Hall of Fame including quarterback Roger Staubach, defensive lineman Bob Lilly, and running back Tony Dorsett.

Tom Landry had a fine NFL playing career with the New York Giants. He later became an assistant coach for the Giants.

Landry grew up in Mission, Texas and later attended the University of Texas. He played fullback and defensive back for the Longhorns. 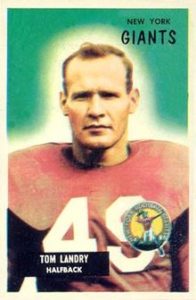 Like so many others playing college ball in the 1940s, World War II interrupted his NCAA career. Landry joined the armed forces after learning his brother Robert had been killed in the line of duty. He flew over two dozen difficult combat missions before returning home. Landry later stated that surviving the war built his confidence.

He broke into professional football with the New York Yankees of the All-American Football Conference, playing one season with the team before the league folded. The New York Giants picked up Landry, employing him mostly at defensive back and punter.

Landry’s coaching legacy overshadows his NFL playing career. He contributed greatly to the Giants on the field, however, and was even named first-team All NFL by both the AP and UPI in 1954. Landry led the NFL in interceptions returned for touchdowns in 1951 and three times finished in the league’s top ten for most interceptions. He also led the NFL in punting yards three times. Landry finished his career with 32 interceptions and a 40.9 punting average.

LANDRY IN THE WORDS OF TEAMMATES AND PLAYERS

NOTE: ALL QUOTES ARE FROM The Game Before the Money: Voices of the Men Who Built the NFL

I could write all day about Coach Landry’s innovations, but his former teammates and players provide the most reliable and credible statements:

Lee Roy Jordan, the general of the famed Doomsday Defense at middle linebacker, ironically noted Landry’s offensive contributions: “When I think of Tom Landry, I think of all the multiple formations in football now. Tom wasn’t the inventor, but he was the one that took and put them into his offense every game.”

Dan Reeves, who worked under Landry before embarking on a head coaching career, credited Landry’s groundbreaking conditioning program as a pillar to the Cowboys’ success. “I had become a player/coach in 1970, and my first job was to help put in a strength and conditioning program for the Cowboys. We put it in that year and paid guys to stay in Dallas for $50 a workout….Instead of going back home to an off-season job, it gave a player enough money to stay around….I think that was the start of the greatness that the Cowboys had because we went to the Super Bowl in 1970, ’71, ’75, ’77, and ’79.”

Many believe Landry started using the shotgun in the 1970s with Roger Staubach, but Cowboys running back Walt Garrison tells us the creative coach solved a peculiar problem with the formation in the early-1960s. “He started the shot¬gun because quarterback Eddie LeBaron was 5-foot-7 and couldn’t see over the line. Landry moved him back so he could see!”Landry also is responsible for the flex-defense and the extensive use of putting men in motion before the snap.

Landry also is responsible for the flex-defense (which occasionally “flexed” a defensive lineman off the line of scrimmage) and the extensive use of putting men in motion before the snap.

The Dallas Cowboys hired Tom Landry as head coach for their inaugural season of 1960 upon the recommendation of General Manager Tex Schramm. The American Football League’s Houston Oilers also offered Landry a contract but Landry chose Dallas. He reportedly stated that the Cowboys offered him more control over the team.

The first years of Landry’s tenure proved difficult. Many fans and writers thought Tom Landry should be replaced but Cowboys owner Clint Murchison, Jr. instead signed Landry to a 10-year contract extension in 1964. Two years later, the Cowboys found themselves playing in the 1966 NFL Championship Game.

Few coaches match Landry’s record of success – he led the Cowboys to back-to-back NFL Championship Games in the years before the Super Bowl and to five Super Bowl appearances. The team won two Super Bowls under Coach Landry and his years cemented the Dallas Cowboys organization as one of the most recognizable franchises in American sports.

Most coaching innovators specialized on one side of the ball. Don Coryell and Bill Walsh were offensive masterminds. Buddy Ryan and Tony Dungy influenced defense with their 4-6 and Tampa 2 respectively. Tom Landry, however, crafted major contributions offensively and defensively in wide use several decades later. Landry’s system and style undoubtedly helped shape the modern game of football.

Coach Landry’s innovations resulted in tremendous success for the Dallas Cowboys organization. He recorded 20 consecutive winning seasons and made the playoffs 17 out of 18 years. The Cowboys won Super Bowls 6 and 12 under Landry. The team also earned spots in Super Bowls 5, 10, and 13. Dallas also reached the NFL Championship Game in 1966 and 1967. The 2-5 championship game record doesn’t properly reflect the Cowboys competitiveness, as they lost each of the Super Bowls and Championship Games by a touchdown or less, and a combined total of 22 points.

He also devoted much time to the Fellowship of Christian Athletes. Many who knew Coach Landry often speak of his faith and high character.

NOTE: All above quotes are from The Game before the Money: Voices of the Men Who Built the NFL, published by the University of Nebraska Press, and available for purchase here.

Here’s what critics are saying about The Game before the Money:

“Fans who remember these players will thoroughly enjoy reliving the good times with the heroes of their youth, and younger fans will get a valuable sense of how today’s game came to be.”—Booklist